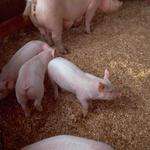 Youth participating in pork industry programs in the state of Wisconsin will benefit from the recent pie and silent auctions at the Wisconsin Pork Association’s Taste of Elegance reception, which was held in conjunction with the Pork/Corn/Soy Expo on January 31, 2013 in the Wisconsin Dells.
The Pie Auction raised $10,300 for youth programs. Pork producers, corn growers, and industry representatives from around the state showed their support for youth involved in agriculture by placing bids on the assortment of pies.
All of the pies were donated by industry supporters and families involved in the Wisconsin Pork Association.  The Rock County Pork Producers were among 13 buyers and contenders providing their support for the event. The highest bid of the evening was for a 40-pound apple pie, which sold for $2,000 to the Rock County Pork Producers.
In addition, a silent auction was held to continue to build the Buell Gunderson Memorial Scholarship fund. The total raised for the Buell Gunderson Memorial Scholarship fund was $1,255. Pork producers and industry representatives from around the state showing their support by donating an item.  The Rock County Pork Producers donated a "Janesville" wagon filled with pig-themed items and a voucher good for tickets to Pork Fest (being held on June 12, 2013).
Pictured at the event are Board Members:  John Morton, Sally Churchill, Randy Kleven, Ed Reible along with several former Board Members and supporters.  Holding the pie is the creator of the sweet treat, Chef Robert Gamble. 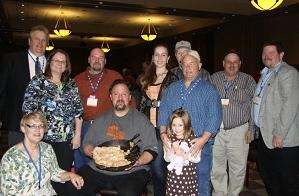 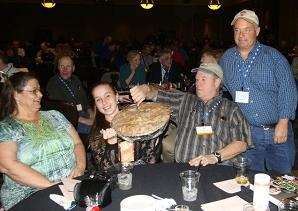